“Both must be viewed on the same wavelength, and no higher than the other,” says Elizabeth Mrema, executive secretary of the UN Convention on Biological Diversity (CBD), the international legal instrument for the protection of biological diversity ratified by 196 nations UN news.

Four of the key architects of the Paris Agreement, including former UN climate chief Christiana Figueres, have officially asked world leaders to sign off on an “ambitious and transformative” global biodiversity deal at the upcoming COP15 on biodiversity.

“The climate and nature agendas are intertwined… Only by taking urgent action to halt and reverse nature’s loss this decade, while continuing to ramp up efforts to rapidly decarbonize our economies, can we hope to deliver on the promise of the to comply with the Paris Agreement,” they said in a statement.

The United Nations Environment Program (UNEP) states that biodiversity loss is already having a significant impact on regional and global climate change.

While natural ecosystems play an important role in regulating climate and can help sequester and store carbon, loss of forests, draining of wetlands, and other environmental degradation around the world have been significant contributors to climate change.

For example, efforts to reduce deforestation and forest degradation and restore ecosystems could help reduce annual greenhouse gas emissions, according to the agency.

“If we invest in nature and natural infrastructure, forests, coral reefs, mangroves, coastal forests, then that protects us from high storms. It provides habitat for species but also stores carbon. So it has both a mitigation and an adaptation dimension,” said Inger Andersen, UNEP Executive Director UN news.

Coral reefs get a new defender at COP27

At the same time, biodiversity is affected by extreme weather events and temperatures, especially in developing countries as the resources to protect it are limited. This is worrying given that 15 of the 17 most biodiverse countries are in the Global South.

The impacts of climate change on biodiversity are already visible, particularly in many animal species that are already being forced to change their migration patterns, plants that are struggling to adapt to temperature changes and, of course, critically endangered polar bears – the “posters” of global warming starving at the North Pole due to lack of sea ice in a warming world. 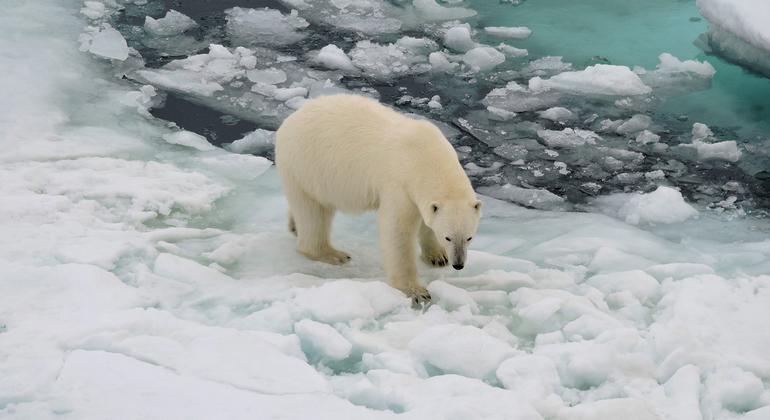 In the ocean, biologists are witnessing another tragedy as coral reefs, which provide food and shelter for over 7,000 other species, are dying due to ocean warming and acidification.

UNEP Goodwill Ambassador Ellie Goulding launched a new initiative to protect these colonial animals at COP27. Last week she led an expedition in the Red Sea off the coast of Sharm el-Sheikh.

“There’s this sheer visual beauty. As you walk through with your mask on and observe this brilliant cornucopia of marine life, you’ll feel like all life is swimming before your eyes. And it reminded me that coral covers only a tiny percentage of the ocean floor, but is home to a quarter of all known marine species,” she told a panel on Wednesday.

Ms Goulding reminded participants that even with 1.5 degrees of warming, 70 to 90 percent of all reefs will be lost; That number rises to a deeply worrying 99 percent if our planet warms by 2.0 degrees Celsius.

“This is one of the most climate tolerant reefs in the world and it just so happens to be right here at your feet in Sharm el-Sheikh. And this is no ordinary riff. It is one of nature’s great survivors and may hold the key to regenerating other reefs in the future,” she explained.

The singer-songwriter said it was “insulting” that less than 0.01 percent of climate finance goes to protecting coral reefs.

“I challenge the global community of leaders to recognize that coral reefs are one of our greatest collective assets, and to get serious, serious, ambitious and competitive in funding, restoration and protection,” she said.

The Amarakaeri Communal Reserve (RCA) is a 402,335.96 hectare protected area managed by 10 Harakbuts, Yines and Machiguengas communities in Madre de Dios in the Peruvian Amazon.

Forests, the Amazon and promises

Important pledges to protect forests were made at last year’s COP26 in Glasgow.

“Some of them are starting to roll off the tape and into reality. But there’s a reason Egypt called this the “Implementation COP”; because these pledges and promises must be put into practice,” said UNEP chief Andersen.

Last week, the European Union also announced a new cooperation framework to combat deforestation in Guyana, Mongolia, the Republic of the Congo, Uganda and Zambia.

On Wednesday, Luiz Inácio Lula da Silva, President-elect of Brazil, drew a large crowd to the pavilions and a boardroom in the afternoon as he stressed that his country would wage a very strong fight against illegal logging in the Amazon and announced that Brazil wants to host the COP30 in 2025.

Mr. Lula da Silva also announced the creation of an indigenous ministry under his new cabinet.

“He will have a big focus on the Amazon and tropical forests. And of course that is a huge win for the climate, biodiversity and people of the Amazon,” said Ms. Andersen in response to the Brazilian leader’s announcements.

“We must act now”

Indigenous activists, who have had a strong presence since the start of COP27, have been particularly vocal today as they are the custodians of our planet’s biodiversity.

“My community was hit by two cyclones in just one year and ours [entire] City was completely destroyed. We don’t want to live like that anymore. We need a safe space; we need a safe planet,” said Adriana da Silva Maffioletti, a young activist from Brazil UN news.

She added that she hopes world leaders will listen to indigenous leadership rather than exploit them.

“Tribal peoples have the most sustainable way of life. So we must learn from them and not ignore them in this struggle. We protect over 80 percent of the planet’s biodiversity,” she explained.

Ms. Da Silva Maffioletti stressed that her people should be the top priority in the fight against climate change.

“It’s not for tomorrow. That’s nothing for 10 years [from now]. That’s something we need to do now. The climate crisis is affecting and killing people right now. So we have to act now,” she explained.

“We will not give up this fight. Resource companies and even some wind energy projects that are not consulted with us are affecting Mother Earth, our sources, our medicine,” said Yenilin Aurielen Lubo Bonivento from Guayu community in Colombia UN news.

She comes from the Guajira department in the north of the South American country, one of the areas in the country most affected by climate change.

The activist is also a biologist and currently teaches science to young girls in her community.

“We must speak out, and science, combined with our ancestral knowledge, is key to combating climate change.”

Update on the negotiations

Regarding the negotiations, the Egyptian COP27 Presidency reported on Wednesday that many delegations are unfortunately “withholding” a number of negotiation spaces.

“Under the current circumstances, we would have hoped for more willingness to cooperate and be accommodating than we see in the reports we receive from the various strands of the negotiations, I reserve the right to judge, perhaps some countries and delegations will show more openness and accommodatingness than the last one Minute is coming,” Ambassador Wael Aboulgmagd, Special Envoy of the COP27 President, told journalists.

He added that they only made “a breakthrough” at the last hour in approving the agenda, which included a claim for the first time.

UN news spoke to Ruanna Hayes, chief negotiator for the Alliance of Small Island States, who confirmed that talks are not particularly hopeful at the moment.

“There are real concerns about how things are progressing across the board. Of course, casualties and damage are a key issue, the main outcome Allianz expects from this COP, and things are still not coming together,” she said.

Special Envoy Aboulgmagd sent a message to the negotiators, reminding them that although each delegation must safeguard its national interests, the scientific reports show that the situation is dire.

“I hope that the delegations in the negotiating rooms will take heart and realize that they need to show progress, not in words but in deeds and implementation,” he said.

Would you like to know more? Check out ours Special events pagewhere you can find all our coverage of the COP27 climate summit, including stories and videos, statements, podcasts and our daily newsletter.