With the global impact of the MCU film Black Panther, as well as this year’s critically acclaimed The African King and Black Panther: Wakanda Forever, the public’s appetite for African and Afro-Futurism stories has been greater than ever. But what is still missing are African and African diaspora creators, especially comic and graphic novel creators, whose stories are authentically told by the major studios and networks. In this exclusive CBM series, we present top creators from Africa and the diaspora, who are making characters and stories fit for films and series. 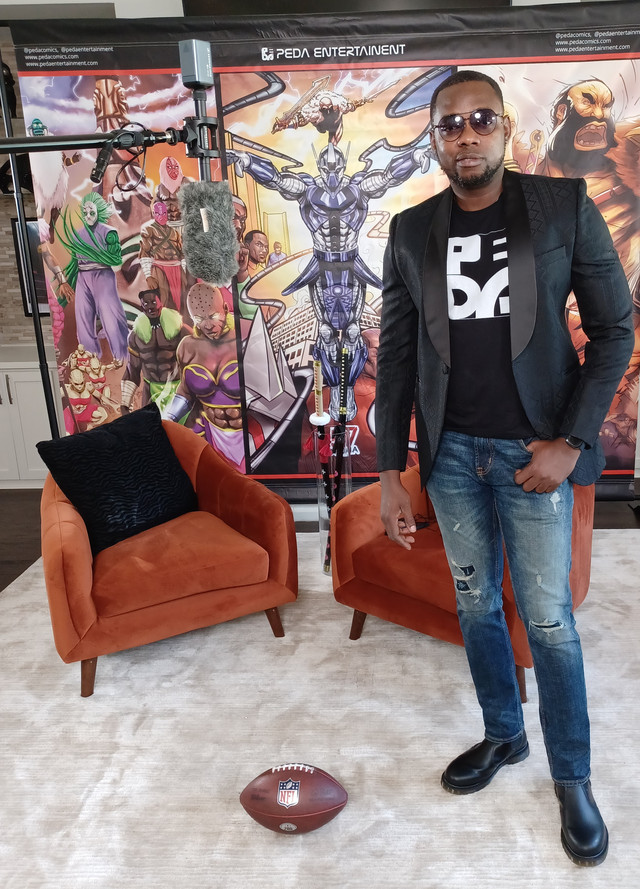 This week we’re interviewing Peter Chizoba Daniel, creator and founder of Peda Entertainment. If you like action, Game of Thrones-level fantasy, sci-fi, and mythology, you’ll love his unique African continent-inspired epic and genre-bending multiverse of titles. Peter is a multi-award winning creator, illustrator and author. He was named one of the top 3 illustrators in Nigeria for his award-winning title, his first published story. CHRONICLE OF THE NEWBORN: RISE OF THE MLEZI , which has been featured in African and international press such as AFROPUNK and Bleeding Cool. He also received the prestigious Glyph Award for Production of Best New Dramatic Comic in 2019 about the struggles of youth with albinism in African society. UNDER THE SUN. His graphic novels and comics have sold out at Comic Cons across the US and have even been admired by top actors like Giancarlo Esposito.

James (CBM): Tell us about yourself, what made you want to write comics and start Peda Entertainment as a studio?

Peter: “I like making comics. i love to draw i love art I’ve been doing comics since I was a kid so you know it’s been a very wonderful journey for me.

It was my favorite thing to do as a kid – when I came home after school or during the holidays I would draw western comic book characters which I read and devoured.

Growing up, I enjoyed the beautiful adventures I had through these mediums such as comics, video games, and cartoons. But something was missing. I didn’t see my African heritage, culture, history and people who looked like me in these stories.

Later in my life I realized that I had to do this. Parents want you to be a doctor or a lawyer or an engineer, but sometimes people are different. I discovered that I have a talent for drawing and storytelling, that’s my passion. I am fascinated by creativity.

I wanted to see African history, culture and mythology in video games, comics and animation. So I figured the quickest way to bring this to life would be through the comics medium. The first story I created was Chronicles of the Newborn. I had to draw the first issue myself. It took me a year to write a 28 page book!

I didn’t know anyone at the time who wrote stories that reflected Africa’s cultural and historical heritage. For example, I love Viking stories that show the wonderful cultures of the Nordic region. But I wanted to see African culture and stories in comics and decided to popularize them for global mass consumption. I created a platform to allow myself to be seen in these stories. As the saying goes, if you want something done, you have to do it yourself.

People have the perception, “Oh, comics are easy to draw,” but that’s not true. It takes a lot of work and a lot of time and money to create a quality release and start your own studio.

Regarding the name of our studio, pronounced ‘Pey dah’ everyone thinks it comes from my name Peter Daniel but about 8 years ago it was registered and founded by me and 3 of my friends so Peter, Eddie, Dary, and Ado. But because everyone had different visions and a different path, it just ended up with me, so I guess it had more to do with my name.”

James: Which comics, authors and artists were your favorites growing up and also your inspirations?

Peter: “It was Valiant, Marvel, DC – no one can refute the fact that Superman is one of the most beloved characters in comics and inspired many people to create a superhuman being. When I was 7 or 8, my first superhero comic was Superman, printed in black and white. I also read TinTin.

In terms of creators or writers, when I was young I didn’t really pay attention to who the writer was, but artist creators like Todd McFarlane – his work always amazed me and inspired me to draw better because of his illustrations being so detailed are. Joe Maduera (known for his work on Uncanny and Astonishing X-Men and his own comic book Battle Chasers) was also a major influence on the comics industry – he was a passionate artist. Also, I don’t want to fail to mention a Nigerian superhero comic that appeared in Nigerian daily newspaper The Vanguard in the late 80’s and early 90’s…this Nigerian creator published four panels in the newspaper every week and we enjoyed this part so much and inspires me.”

James: What is your vision for Peda?

Peter: “To build a studio that caters to African curiosity about storytelling, and we do it out of sheer passion. Africans around the world are curious about their past and the possibilities of the future. Storytelling is powerful. It’s a way to shape people, shape children, and shape the future.

For example, if you are raising two children and damagingly tell one that he is useless and stupid and another child, tell the child that he is a winner, one who will be great. Of course, her life is influenced by this world. But what we want to do, despite what their parents are telling them negatively, is to tell them powerful stories that will help them believe in themselves, to inspire them to be the best.

So we want to create a global brand that will help ignite and spark African curiosity through our stories, to quell the lies and the deceit that comes from Africa and to highlight true African history and folklore.”

James: Can you tell us more about the artists and writers?

Peter: “The artists, illustrators and writers we work with are specially selected for each title to ensure they share the same creative spirit and understanding of the heritage of original African heritage. So we’re very specific and very careful to work with those who already have our shared vision, so we can achieve what’s needed faster. We don’t have to spend so much time coaching the artist and educating them about African history and mythology. You know it. They agree with our vision from the moment they start working for us. From this we all develop beautiful and powerfully compelling stories.”

James: You were born in Nigeria and now live in Texas. What was your own journey to America and what did you learn as a Nigerian about being part of national and cultural identities?

Peter: “Yes I was born in Nigeria but yes I immigrated in 2015 and have made many trips to America over 20 years. The trip was great and allowed me to be in contact with a variety of experiences and different cultures. As you know, the American economy is one of the most stable and has ensured my livelihood to better achieve my dreams for this studio.

But as you know, “there’s no place like home,” no matter what it is; You still want to be home with your family and all the beautiful family memories growing up.

Both cultures are very important to me. It wasn’t such a big deal moving here. We have been attuned to America since childhood because most of the content we consume is American.”

James: Which of your titles would you most like to see made into a movie on the big screen?

Peter: “I would love to see most of Chayoma on the big screen because Chayoma is a story that is very close to my heart for personal reasons. She represents one of the most powerful black women in history. She represents the raw energy and power of the black woman growing up in a world of chaos. I’ve also tried to tell my story true to the original inspiration, full of compassion but still struggling to survive. There’s a saying, you know, if you’re nice and kind you look weak, but I don’t think it’s true. I believe that the good hearted are the strongest because in this world you need those people to keep it going. The others can be negatively minded and complacent. In the end they will get nowhere. So for me, there is a message in Chayoma that lets people know, “Yes, you can be compassionate. Yes, you can be kind and still be as powerful as an atomic bomb.’ ” 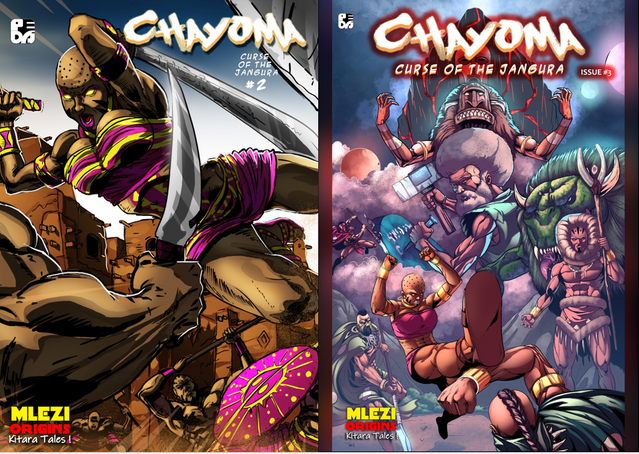 James: When you watch Marvel and DC movies like Black Panther, what would you do in your cinematic universe that would make Peda Entertainment stand out?

Peter: “What sets us apart from these films is that we tell the original African stories. Since I’m African and I’ve done my research, a lot of research. . .I have even traveled and gone back to the villages to speak to the village elders to capture these stories. And I see that there are stories that haven’t been told yet, and the way we’re going to tell them will be different. We will feature African stories that will make us stand out because they are not superficial. Every story we create has the ability to be explosive because we individualize our stories so each story has its own universe represent the majesty of this story and make it massive.”

James: What do we think of your comics and graphic novels?

Peter:“You can browse our books online for free and then order printed collector’s copies directly from our website at www.pedaentertainment.com. You can also find us on Instagram at @pedacomics, on TikTok at @pedaentertainment and on Facebook at pedacomics. And be sure to visit us at the Comic Cons!”

In the second part of our interview with Peter, we dive into the Pedaverse!