After first announcing a partnership last year, National Grid plc and Copper Labs Inc. said they had shown how targeted messaging can help customers reduce energy use during extreme weather events such as the bomb cyclone that swept the east coast in January, to lower. 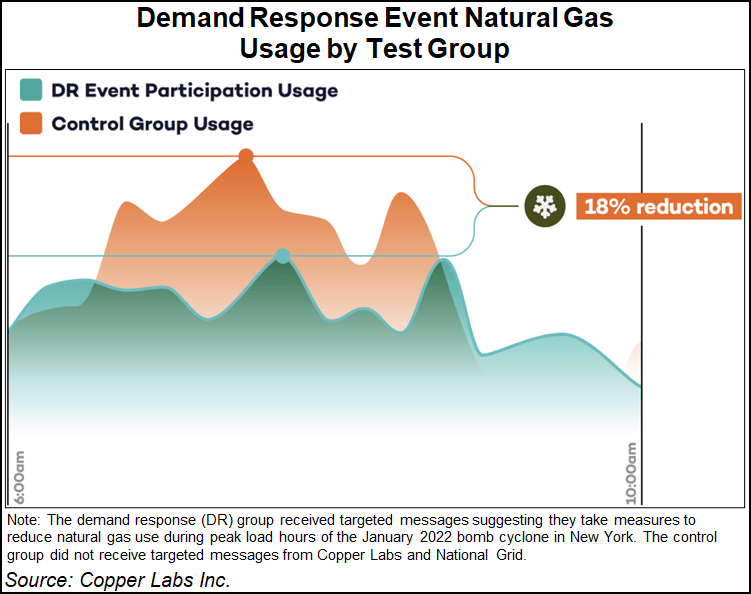 “With Copper’s technology, we can access gas usage data from meters every 30 seconds instead of every 30 days,” said National Grid’s Tara Kapila, vice president of customer product growth, after the funding round. “We’re using this capability to test new programs that encourage customers to adjust their energy consumption in real time.”

The notifications were sent to customers’ smartphones, urging them to change their behavior by turning the heat down a few degrees or delaying a hot shower to conserve natural gas.

Copper Labs released the case study results in October, which showed that the DR group reduced their natural gas consumption by approximately 18% compared to the control group, which did not receive targeted messages.

Both the test and control groups were equal in size, according to Copper Labs, and the company used a randomized control approach to get the results.

“While customers saw some energy savings, the primary purpose of this pilot was to evaluate a unique approach to behavioral demand reduction versus smart thermostats or other technologies,” said Essie Snell, product marketing manager for Copper Labs NGI.

Copper Labs’ hardware, Snell noted, is “smaller than a pack of playing cards” that customers plug into a household outlet.

The question the two companies wanted to answer in the pilot, according to Snell, was whether “utilities influence customers to be part of the solution when the gas supply system faces high spikes during extreme weather events, which are becoming more common in the face of climate change.” .”

Snell noted that DR events for both gas and electricity “typically have what is known as a ‘bounce back’ effect after the event window as customers turn up the heat again and increase energy use.

“This may offset the net savings during the event to some extent, but we did not quantify the impact in this particular pilot as the primary focus for us was to help a gas utility maintain pressure during a peak demand window, to ensure that gas service remained reliable and sufficient for all customers to successfully heat their homes,” said Snell.

According to the case study, the natural gas savings resulting from the targeted notifications helped National Grid avoid business interruptions.

So far, Copper Labs has been testing its services with its in-home wireless device at the household level, but is looking to partner with utilities and carriers to scale its technology to the neighborhood level.

Scaling could result in Copper Labs having its new hardware “installed in one central location, such as programs that can scale much more quickly than would be possible with an in-home approach,” Snell said.

London-headquartered National Grid said earlier this year that it is working to convert its natural gas grids in New York and Massachusetts from fossil fuels to hydrogen or renewable natural gas by 2050 to achieve net-zero emissions.