This month we feature our favorite frames from playing at home so far. 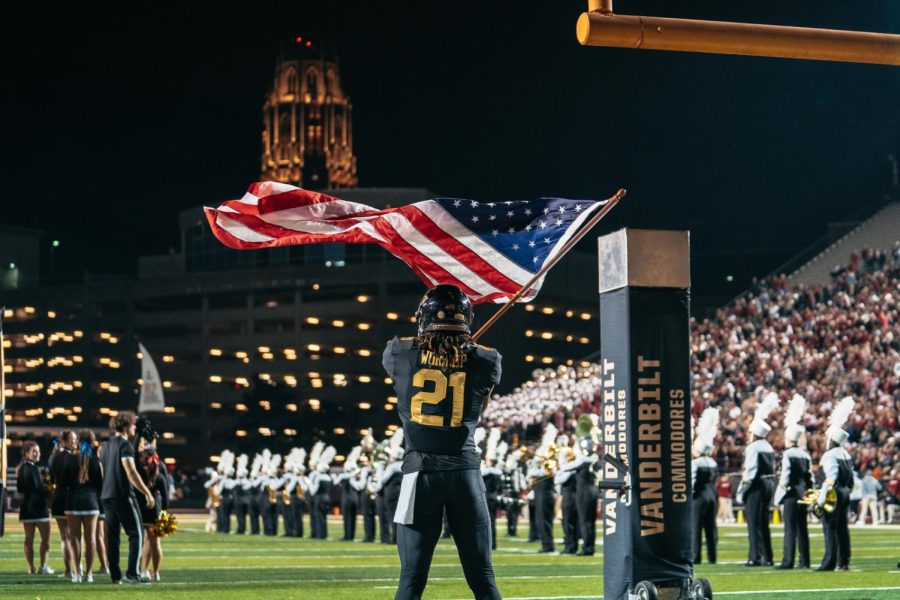 Maxwell Worship hoists the American flag as the team prepares to enter the stadium as photographed on November 5, 2022. (Hustler Multimedia/Arianna Santiago)

After a short break away from home, the ‘Dores are back on their home turf. The regular football season came to an end, just in time for chilly fall temperatures and some equally cool Memorial Magic action. The football team put on a strong performance against South Carolina, and the baseball team met Hawkins for a game of scrimmage in the November sun. Check out some of our favorite frames below.

The Commodores dominated the Mississippi State Bulldogs on October 23 to win Vandy’s only home game of the week, 2-1. After taking credit before that Senior Day game, Alex Kerr scored the first goal of the game. Despite a 6-2 shooting difference, Vanderbilt and Miss State went into the second half tied 1-1. 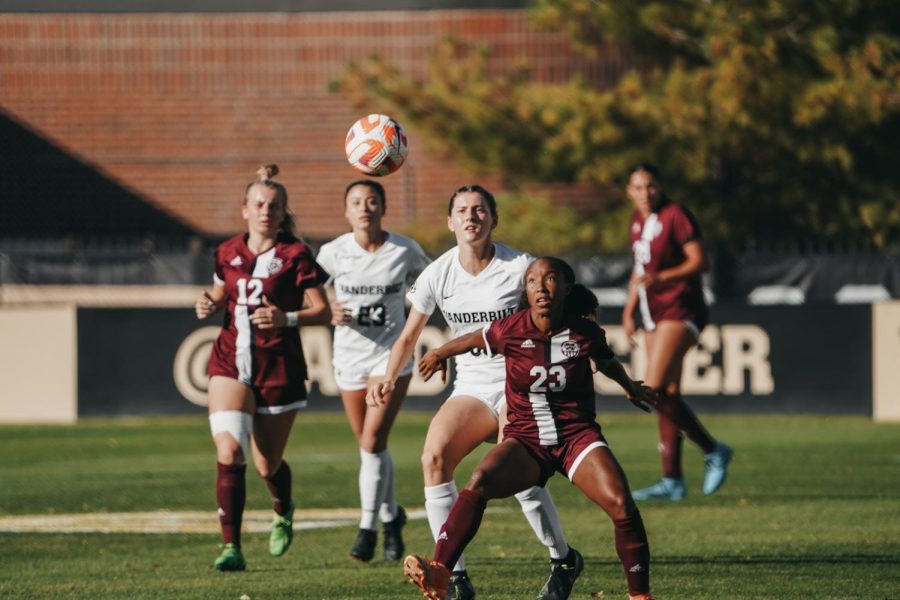 The team failed to capitalize on four corners, two shots from Amber Nguyen and two headers from Peyton Cutshall. Then, in the 75th minute, Alex Wagner and Hannah McLaughlin scored. A strong defense in the last 10 minutes sealed the 2:1 for Commodore victory. 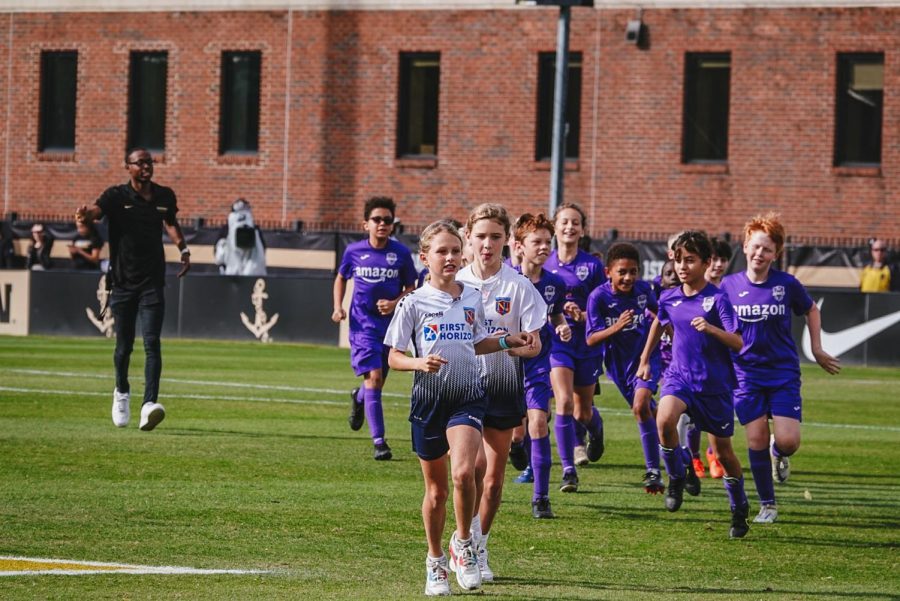 The Commodores angered Clemson with the No. 5 in the first round the NCAA DI Women’s Soccer Championship and will be faced the No. 4-seeded Northwestern Wildcats on Friday, November 18.

On November 5, after a bye week, the Commodores returned to First Bank Stadium to face the South Carolina Gamecocks. The first drive of the game ended with an interception from AJ Swann, which South Carolina converted for a touchdown. Swann and company responded with a five-play drive that ended with a 66-yard TD reception from Quincy Skinner Jr. — the first of Skinner Jr.’s career. There was also a push between the two teams in the first quarter, which led to an equalizing penalty shoot-out. 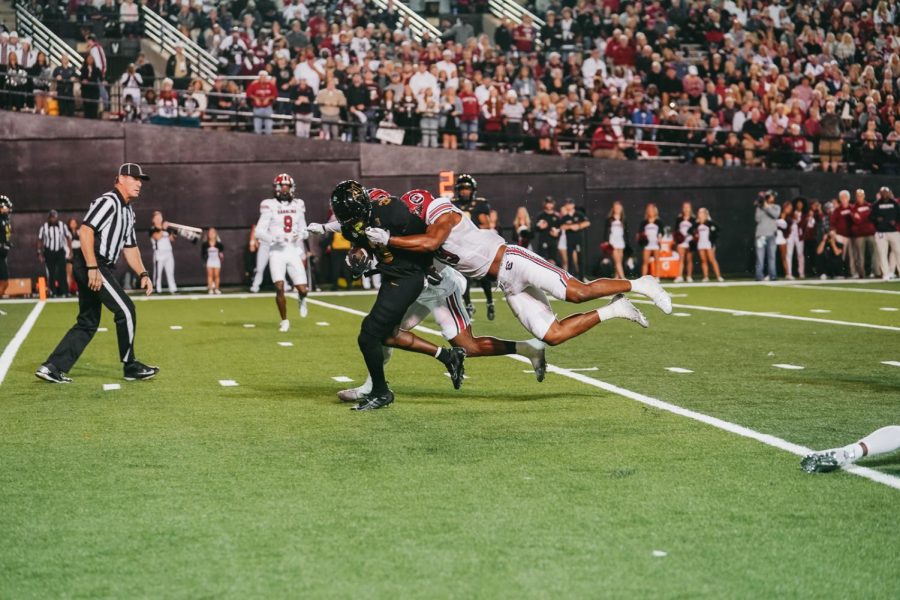 After the Gamecocks responded with their own 60-yard TD reception, Vanderbilt’s Ray Davis responded with a 25-yard run. A few more missteps by Commodore (namely, a missed 44-yard field goal, a dropped pass, and a fumble) left the ‘Dores 17-7 by the end of the first quarter. Swann and Skinner Jr. then reconnected for a touchdown, and the offense seemed to find its groove again. 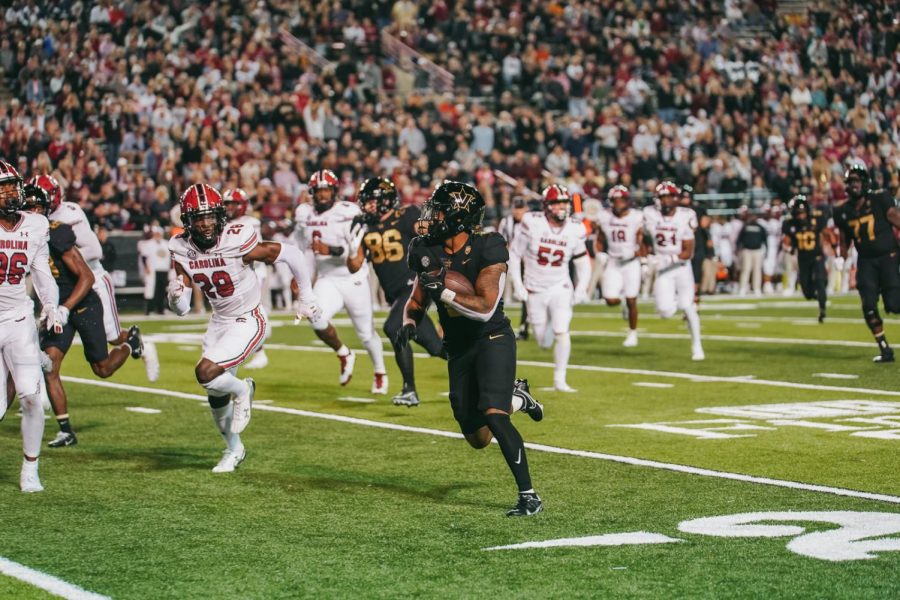 Skinner Jr. finished the night with 79 receiving yards and Davis hit a career-high 167 rushing yards. After QB Mike Wright replaced the injured Swann, Vanderbilt beat South Carolina 13-7. But it wasn’t enough to undo first-half mistakes, and Vanderbilt suffered their fifth loss of the season with a final score of 38-27. 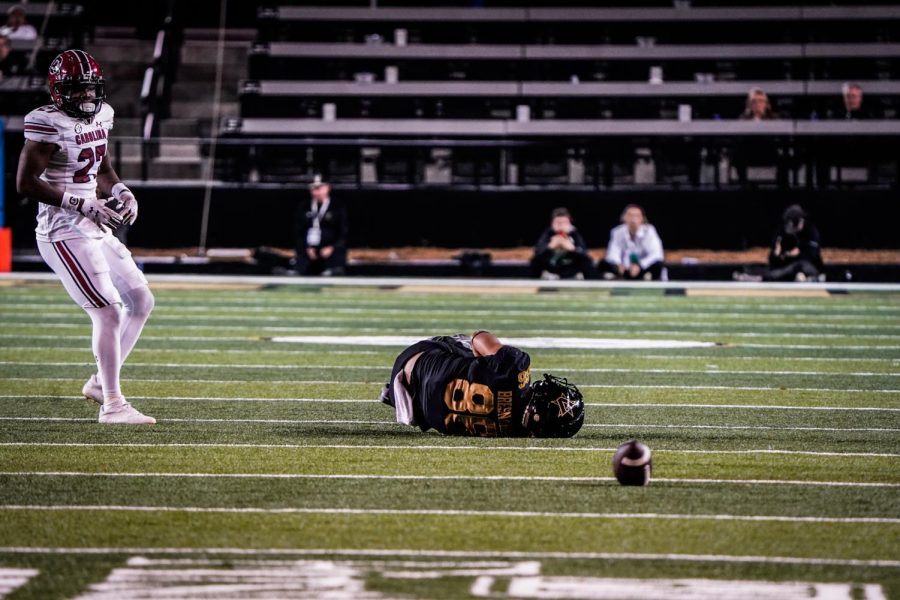 That loss seemed to trigger something, though. The following week, the Commodores defeated then-No. 5 Kentucky, clinching theirs first SEC win in 26 games.

The men’s basketball team hosted Memphis at their home game on November 7th. The Commodores managed just 6 points in the first 11 minutes of the game and set the tone for the rest of the game. Aside from a fast-break conversion and a spirited dunk from Emmanuel Ansong, Vanderbilt couldn’t find momentum in the first half. 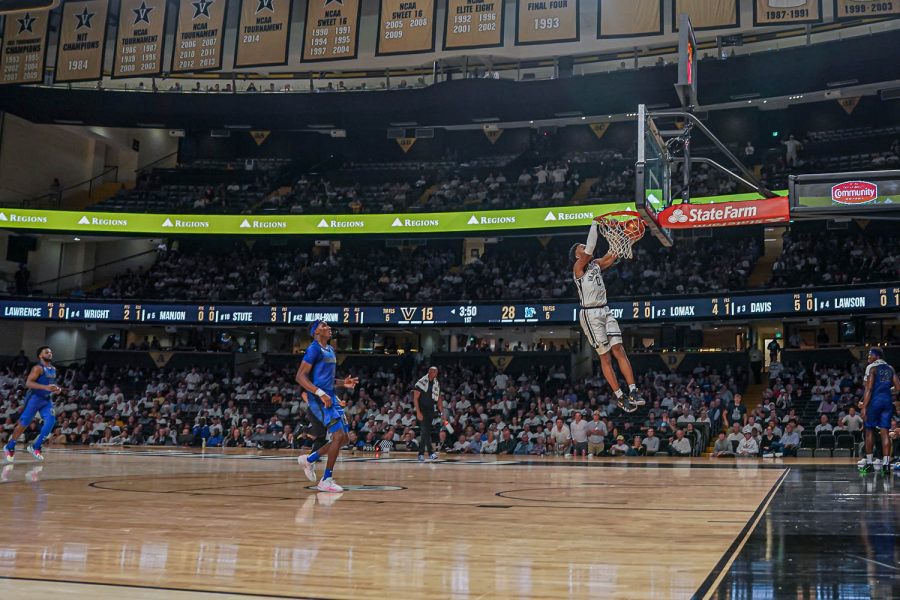 “I think, you [Memphis] Playing with the lead, they felt comfortable for most of the game,” said head coach Jerry Stackhouse. “We didn’t really put any pressure on them that can change the game for you.”

The Commodores outplayed the Tigers 45-42 in the second half, but it wasn’t enough. A roster without Scotty Pippen Jr. struggled on the hardwood, with Tyrin Lawrence leading the night by just 14 points. For the first time since 2016, the team lost their home startfalling 76-67. 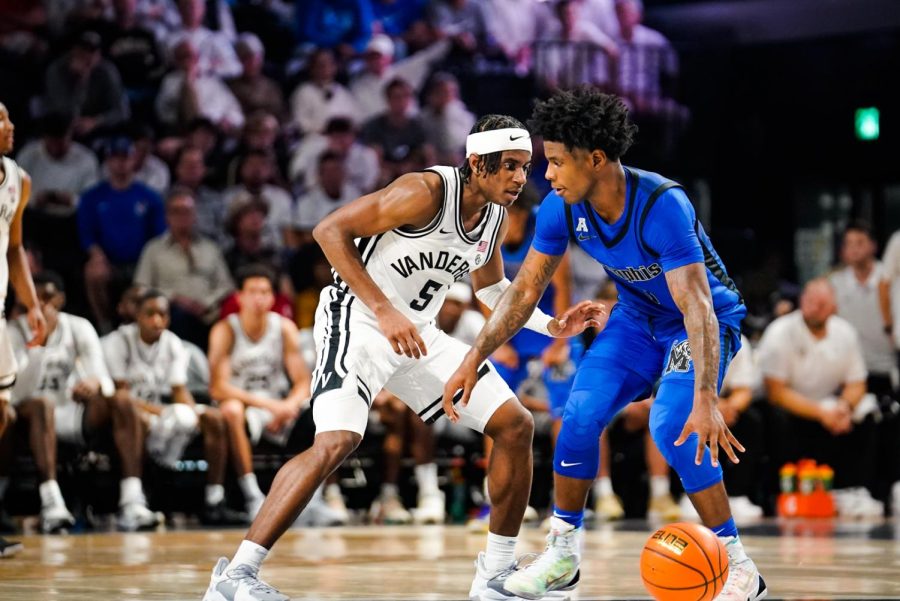 Unfortunately for the home crowd, the second game of the year against Southern Miss on November 11th started just as slowly as the second. Vanderbilt managed to hold the score close in the first half and entered the dressing room with a manageable 29-25 deficit. However, the team failed to find the basket and ended the night 3-25 with three points and 21-64 from the field overall.

“Tonight was a disappointing loss for us,” said Jerry Stackhouse 60-48 final score. “We kind of dug ourselves into a little hole. We have to do better.” 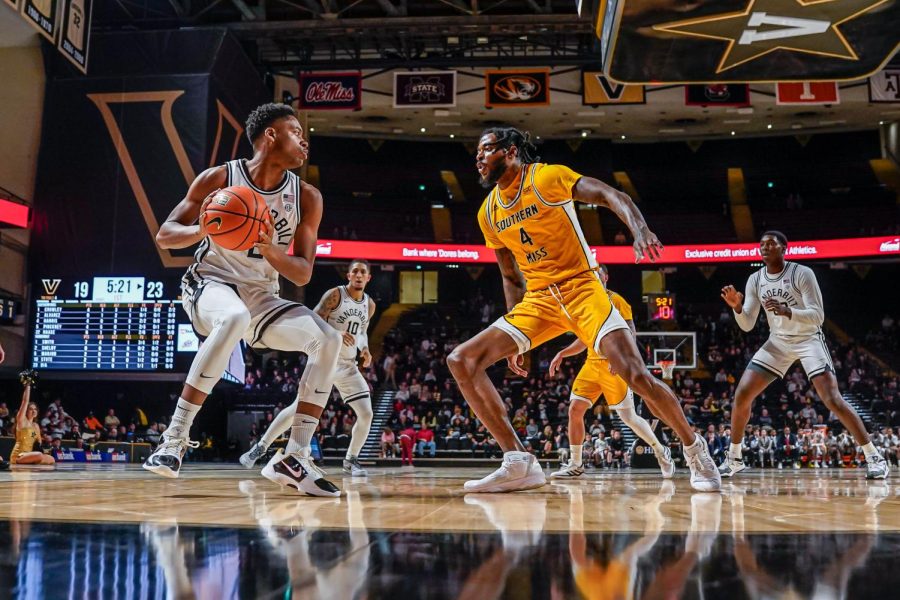 The Commodores traveled to Philadelphia on November 15 to face off against Temple. They fought back, but eventually lost in overtime72-68.

Luckily, the women’s basketball team didn’t get involved in the struggles of their male counterparts. They defeated Tarleton State after scoring a comeback win over Columbia two days earlier sealed their first 4-0 start since the 2014/2015 season. Vanderbilt opened the game against Tarleton State with a 9-0 lead and held it on just 23.8% (5 to 23) shots in the first half. 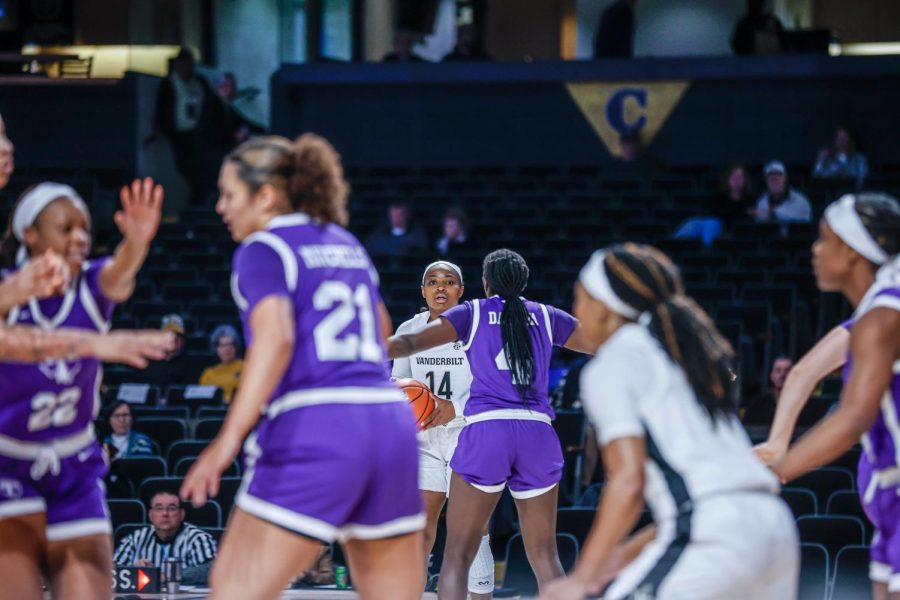 After a 33-18 lead at halftime, the Commodores beat the Texans 30-20 in the third quarter. High school senior Marnelle Garraud scored a 3-pointer early in the fourth quarter to lead the team by 16 points for the day. Vanderbilt continued to dominate and ended the night with a stunning 84-48 win. 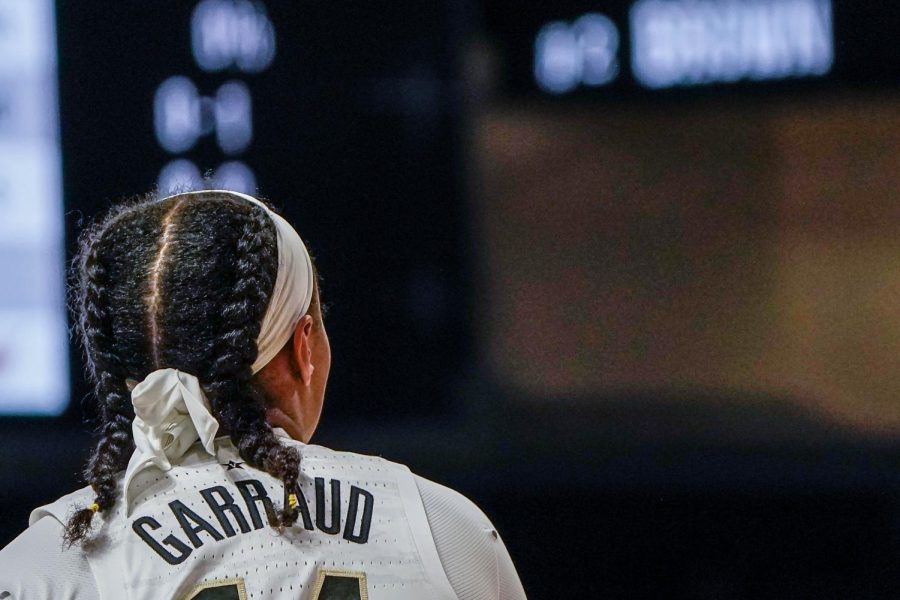 The Commodores will host Morehead State on Friday, November 18th.

The VandyBoys played their annual fall scrimmage, the David Williams Fall Classic, on November 13. The cool temperatures were matched by the cool pitching performances of Sam Hliboki and Greyson Carter for the Black team and Jack Anderson and Cole Regen for the Gold team. 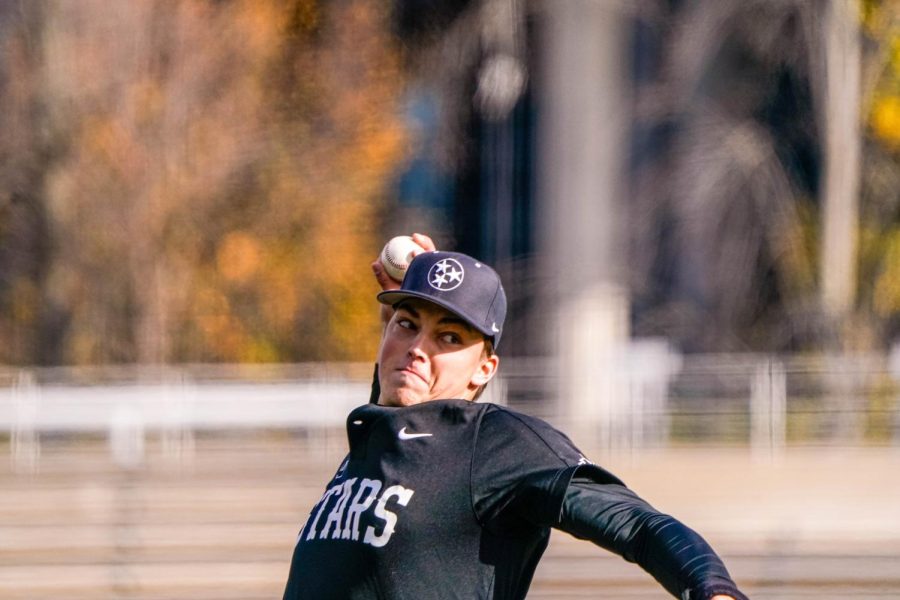 After five scoreless innings, outfielder TJ McKenzie hit a two-run homer in left field to put the Gold team ahead. Two Black team stars were Ryan Ginther, who hit seven from the mound and didn’t allow any runs in a nine-shot hold, and JD Thompson, who put up two shutout frames. 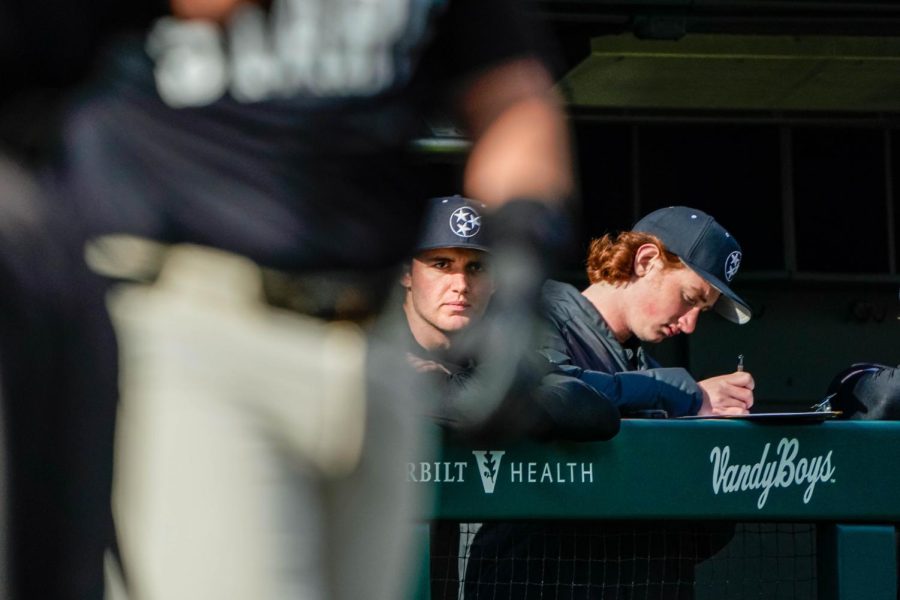 A player watches someone approach to bat on November 13, 2022 (Josh Rehders/Hustler Multimedia).

Vanderbilt will open its 2023 season on February 17 at the College Baseball Showdown in Arlington, Texas.